The Ultimate Yelp Fact Sheet for 2022 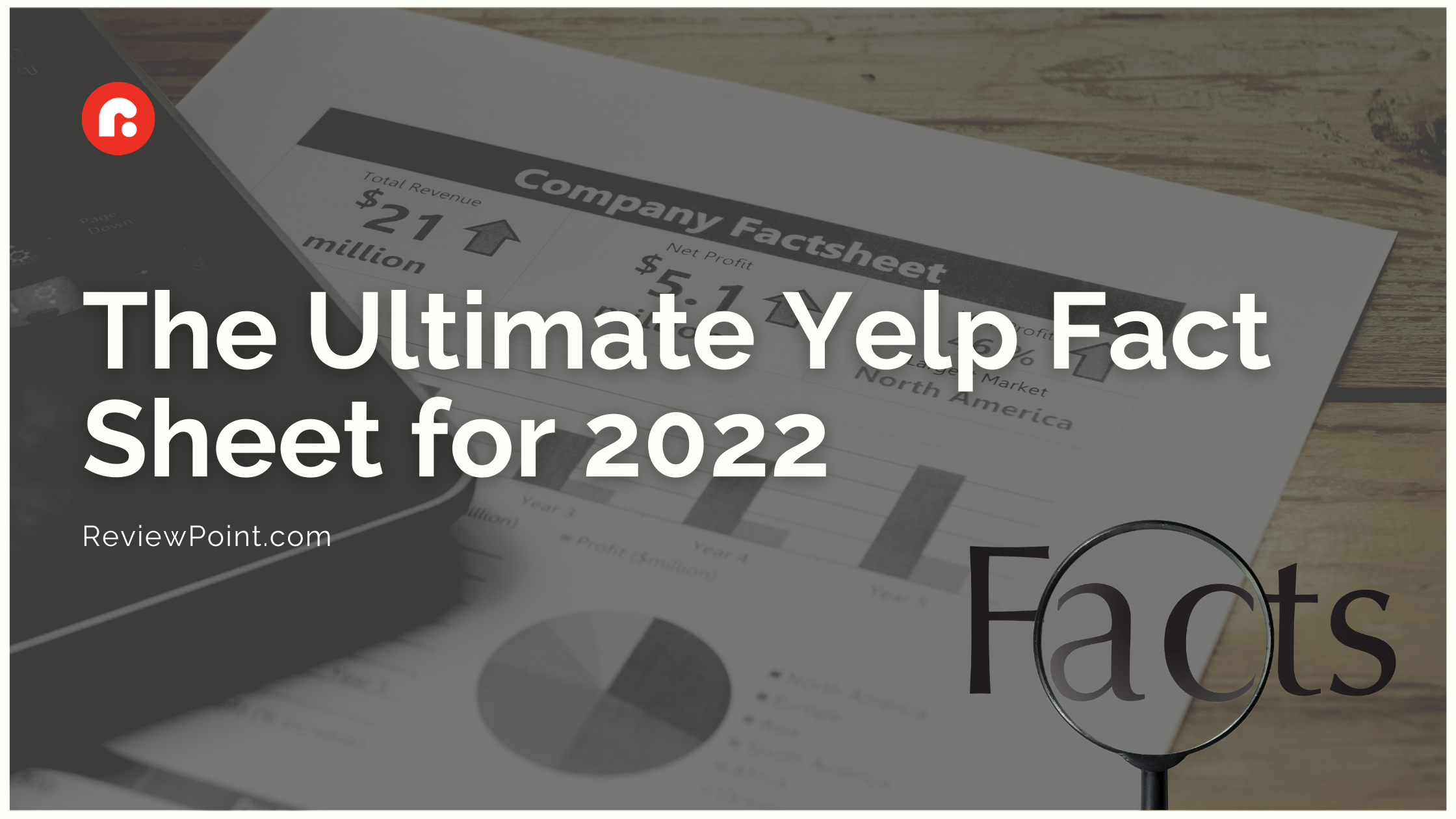 In 2004, a little online review website called Yelp was launched in San Francisco. Since then, Yelp has grown to become the 44th most-visited website in the U.S!

The name Yelp is meant to sound like a cry for help. And help is exactly what Yelp does. Now competing with Tripadvisor, Google My Business and Facebook reviews, Yelp is a leader in the online testimonial space. Many businesses have taken note and claimed their Yelp pages to monitor and moderate their reviews.

But you might not be convinced. With so many other online review sites, is Yelp really worth the time? This Yelp fact sheet will highlight several Yelp fast facts and share everything you need to know about Yelp, including how the site can help your business. Let’s get started!

At this point, you may be wondering, how many reviews are on Yelp, anyway? The answer is A LOT. As of April 2021, there are 184 million reviews on Yelp, and this number grows every day. But who’s writing so many reviews? That would be many of Yelp’s 178 million monthly unique visitors.

More than 5 million businesses have claimed their Yelp listings. Almost half of everyday consumers—about 45%—will check those listings before deciding to visit a business.

When customers find you on Yelp, 35% will visit your location within 24 hours. Another 97% will spend money on your business in the future whether it’s online or in-store.

After visiting your storefront, some customers will write a review and rate your business based on a five-star system. For every additional star your business listing earns, your revenue can increase by about 9%.

These statistics demonstrate just how much power Yelp has to impact your in-person visits, conversion and revenue.

Yelp fact #3: Yelp works for many types of businesses

There are many types of businesses featured on Yelp. Home services, like plumbers, electricians and landscapers, have 18% of the total reviews on Yelp. Restaurants make up another 18% of reviews, and retail shopping comes in with 16% of the reviews. Beauty and fitness are 11% of the reviews, and health services—like doctor’s offices and hospitals—have 8%. Twelve percent of the businesses aren’t categorized, and the remaining 25% of reviews are split between auto, arts and entertainment, and travel.

For a long time, restaurants dominated Yelp and had the greatest share of reviews. But that’s no longer true. Nowadays, people are just as interested in reviewing their HVAC repair person as they are their favorite dive bar. The diversification of businesses reviewed on this site helps Yelp users find all the reviews they need in one spot.

If you’re a minority-owned business, Yelp offers a platform for you to make your diversity known. Taking advantage of this feature clearly pays off!

The age breakdown of Yelp users is surprisingly even. Thirty percent are between ages 18 to 34, 36% are between ages 35-54, and the remaining 33% are 55 and older (1% is unreported). No matter what age bracket your business caters to, they’re probably looking for you on Yelp.

Keep this in mind as you're creating your Yelp profile. Write in a way that will appeal to someone with a college education, since most people viewing the listing will fall into those categories.

Given the high academic achievement level among Yelp users, this probably comes as no surprise. Most Yelp users (54%) make more than $100K per year. Another 23% earn between $60-99K, and the remaining portion of users make less than $59K.

If a customer found you on Yelp, there’s a good chance they have the means to spend money—and in many cases, a lot of money—at your business.

This fact sheet for Yelp is a great start, but understanding the true value of Yelp starts with setting up your free listing. Claim your Yelp listing, and start monitoring your reviews to increase revenues and grow your business today.